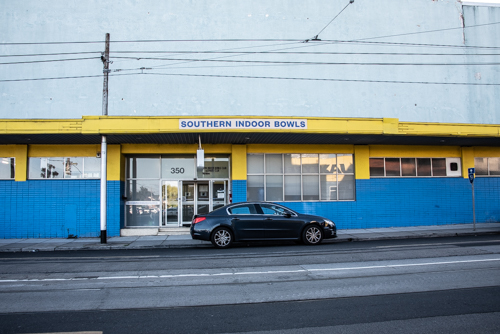 Railing in front of upstairs seating

Glen Eira Historical Society recently received some items from the Club, including photographs, club badges and various documents and ephemera, kindly donated by the President Ted Russell. Members of GEHS were invited to take photos of the club before the building was handed over to the new owners. Slideshow images above were taken by Barb Went in early 2020.

Sold in 2019 for $10.26 million, the future of this building that housed the first indoor bowls club in Australia, Southern Indoor Bowls, and the former Camden Theatre is uncertain. Recently Glen Eira Council refused a planning permit for the construction of a 9 storey
building of apartments and supermarket but the case has now gone to VCAT.

Update 2021 – VCAT decision of 5 November 2020 granted a permit for the construction of an eight storey, mixed use building including a ground floor supermarket and dwelling entry, with dwellings in levels above. The proposal includes basement car parking accessed from Hawthorn Road and service access for the supermarket from a rear lane.

A city of two million inhabitants, Melbourne, Victoria, the second largest city in Australia, experiences fairly cold and lengthy winter conditions, in contrast to warmer temperatures during the same period in most other parts of Australia. It is also during winter that this city receives a good proportion of its annual rainfall; hence, the ground is very soft and damp, dismissing any possibility of indulging in the traditional sport of outdoor bowls, unless a club has a special winter green. Is it any wonder then, that when visiting England in 1965/66, Mr TC (Tom) Watson, after frequenting many of the indoor lawn bowls centres there, immediately got the inspiration that here was something which might well be emulated back in his home city of Melbourne.

Upon returning to Australia fully enthusiastic about introducing an indoor lawn bowls centre for Melbourne he discussed his idea with many bowling friends only to receive a negative response from them. Still confident and persistent about the idea, he presented his comments and proposal in an article in the ‘bowls’ journal through the courtesy of the Royal Victorian Bowling Association.

At first it appeared to receive little interest, other than from Mr Elrick Tait, an Elwood bowler, who could see the potential in the proposition. So Mr Tait called on him.

They immediately began looking around for a suitable building…and it was not long before they found one ideally suited, and situated in the suburb of Caulfield within two miles distance of 20 bowling clubs. The site was the premises of the Brunswick Bowl, a “Ten-Pin Bowl” centre, (no longer operating) and formerly the Camden Theatre.

It was then decided to purchase the building at Caulfield which was acquired for $120,000. A meeting was subsequently called and after full discussion it was decided to form a club to be known as the “Southern Indoor Bowls Club”’ and a working committee of five was elected to establish it.

Fortunately, the alterations made by the Brunswick Bowl people when converting the old Camden picture theatre left very little structural work to be done. Then came the laying of the bowling green surface, a very important feature which needed expert handling. It so happened that a Mr. E. H. (Ted) Harding had recently arrived from England to reside in Australia, and he was highly experienced in the laying of indoor bowls surface material, having carried out this work for numerous centres in England. So his services were engaged to supervise the laying of the special lawn green surface, a material called “Acriturf” over a “Cush-N’Tread” underlay. The life of this green surface is estimated to be in the vicinity of ten years.

This modern indoor bowling centre was officially opened on 3rd September, 1969, to a capacity house, and with a membership of some 440 persons.

Unlike other bowling clubs, women will have the same rights as men, and women without husbands may also join. The project is being financed by members, who purchase a $200 debenture when joining the club, the interest of which covers their subscription fee.

If you are interested in the history of the area and would like to volunteer we would love to talk with you. You may be able to help with cataloguing our collection, research, speaking to community groups, interviewing for oral histories, producing our newsletter, displays and exhibitions and more.

By clicking on the submit button you agree for a representative of the Glen Eira Historical Society to contact you regarding your application to volunteer.